Second day of BC cuisine. I was hoping for a repeat of the energy levels of the previous day, but I wasn't that lucky... Still a fun and delicious day.
First, Flash-smoked Wild Coho with Concord Verjus. We started by curing the salmon for 24 hours with Fleur de Sel and crushed dried seaweed. This pulls out the moisture and replaces it with a deeper flavour of the sea. The the salmon is cold smoked for roughly one hour. The apparatus for doing this was so neat. It involved a plastic bucket, a cold smoker burner, an aquarium pump and some cedar boughs. The cedar is placed right on the lit cold smoke pellet, at the bottom af a large plastic bucket. Then the salmon is placed on a rack near the top, the lid goes on and it smokes The aquarium pump helps to blow air onto the lit pellet and keep it smoking. Once it is done, slice very thinly and serve. So , so good. We served it on a bed of arugula and escarole with a dressing that used fresh concord grapes crushed with olive oil and mint and allowed to steep. The sweetness of the dressing was perfect with the sharp arugula and the bitter escarole. 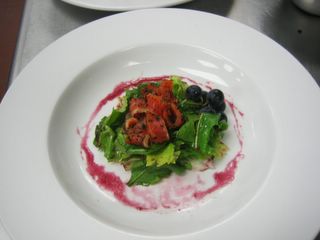 The next course was Veal Paillards With spinach and basil, Gorgonzola and Chive Polenta and Braised Kohlrabi. I forgot to bring my recipe homr for the polenta, I will update that later. The veal was ok, nothing to write home about, but the polenta was goooooood. Creamy, hint of gorgonzola ( I cut back on the recipe because I didn't want it to kill the other flavours in the meal), lots of fresh chives stirred in at the last second. And the kohlrabi was decadent ~ braised in cream with fresh dill added at the end and topped witha roasted red pepper brunoise. 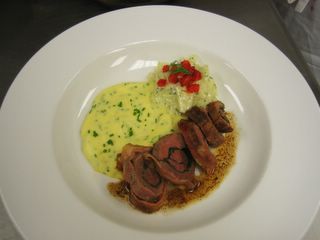 Finally, dessert. Grilled Okanangan Peaches with pomegranate and amaretto sabayon. Really amazing. Chef Chris was in the Okanangan on the weekend and brought us back fresh peaches to use. Nothing tastes like a fresh tree-ripened peach. Unless it's one taht has been lightly grilled, topped with caramelised brown sugar and served alongside a rich sabayon. We also baked off some of the leftover puff pastry and made littel puff pastry flowers for garnish, along with a reduction of some of my leftover pomegranate juice. 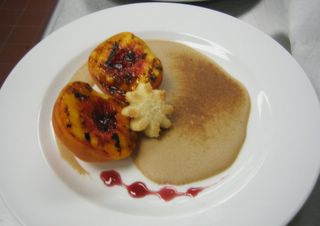 Everything looks great. That chive polenta seems right up my alley (as in something I might have a snowballs chance of actually being able to make).

I'll post the recipe when I get around to writing the day up...