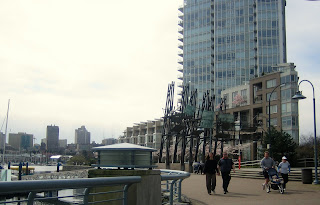 I was out in Yaletown, chatting with the captain of a boat that I was being recruited to cook for. The deal fell through, but I can't say that I am devastated. The stories I was hearing about this particular boat were kind of scary... 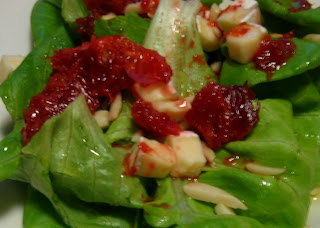 For starters, a bad piture of my butter lettuce and blood orange salad with slivered almonds and brie. 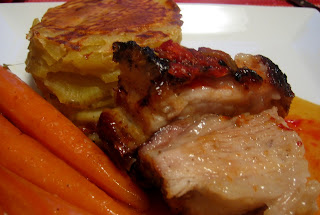 Posted by Unknown at 8:01 AM No comments: 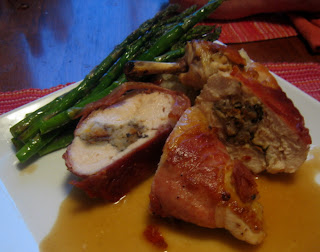 The sun comes out for 30 seconds and the locals go crazy. The seawall was packed this afternoon, people were playing beach volleyball, frisbees were being tossed etc. It was only 10 degress (50 for you south of the border folks). Unfortunately, the pictures mostly sucked due to playing with a crappy camera. 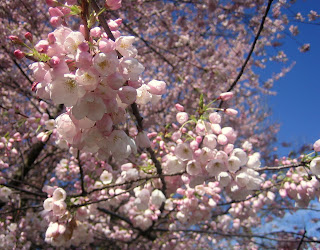 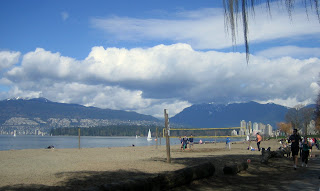 Email ThisBlogThis!Share to TwitterShare to FacebookShare to Pinterest
Labels: Vancouver 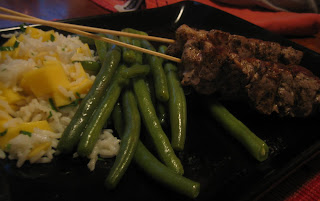 was lamb stew eaten at 10pm with a glass of red wine and my sore feet up. I worked a double, so I was home quite late, but Rob had saved me some of my favourite stew. I am taking it for lunch today too.
Posted by Unknown at 6:21 AM No comments: 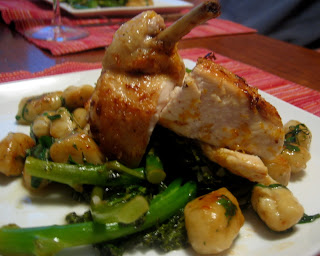 I made roasted chicken breast with meyer lemon zest, gnocchi with lemon and basil and garlicky rapini.
Posted by Unknown at 7:03 PM 3 comments: 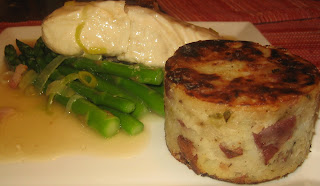 Pardon the bad picture ~ I am working with a broken camera. This is Tuesday dinner ~ braised halibut with asparagus and smashed potato cakes.
Posted by Unknown at 7:06 PM No comments:

My Blood is still pumping from this over the top visual knockout.
Posted by Unknown at 10:26 PM 2 comments:

My trip in pictures. 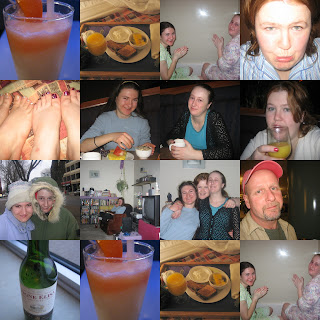 Posted by Unknown at 5:54 AM No comments:

Back from Edmonton and still trying to catch up on my sleep. Air Canada is on my bad list right now, although my air miles are with them so there is not much I can do about it. Let me tell you a non food story.
Leaving Edmonton I was already sleep-deprived and cranky; 6 hrs of sleep in two days will do that to you! I went to auto check in, punched in my info, printed my boarding pass. Wait! What's this?? The BOARDING time on my pass was showing up as 8:35pm, a full hour and a half past when my flight was supposed to DEPART. I was changing planes in Calgary, so my new arrival time in Vancouver was 11:30pm... not good. I went over to the Air Canada desk and explained the situation to the nice young man. I was polite, but there was a definite note of hysteria in my voice (just want to go home and sleeep). He very graciously explained that my flight was delayed by two hours, but he switched me to a direct flight to Vancouver. I loved Air Canada at that moment. I had purchased this ticket with airmiles and they didn't bat an eye about giving me a new one.
My Euphoria didn't last long. I had a bite to eat, then proceeded to my gate. Wait! What's this?? Now my flight departure time has been pushed back half an hour. I called Rob to warn him. Then, the board changed it to 8;30, now delayed by an hour. The Air Canada agent was adamant that we would depart at that time and arrive in Vancouver in plenty of time for everyone to make their connecting flights. The plane landed at 8:05. They unloaded. They loaded. We taxied out of there so fast, the inflight safety video was still running as we headed down the runway. In an effort to make up for the extreme delays (now an hour and a half) the flight attendants offered us drinks on the house (or plane). We finally landed in Vancouver at 9:30 local time. Wait! What's this?? Our gate was occupied, we had to sit on the tarmac waiting. The passengers bound for Kamloops on the last flight of the night were told that a representative would be meeting them at the gate (in other words, you missed your flight). Someone started crying.
Finally liberated from the plane, I stormed off to baggage claim where Rob was waiting. Had been waiting for an hour. The luggage came. The luggage stopped coming and 3/4 of the passengers were still standing there waiting. An announcement was made that the plane had to be offloaded by hand and would take a while. We settled back to wait. The carousel started up again, a few more bags came out. Then lights started flashing. Wait! What's this?? Now the baggage chute was jammed and they had to clear it by hand.
It was midnight by the time we arrived at home.
Oh and to make things extra sweet, I dropped my camera on this trip and seriously damaged it. If I squeeze it together as I press the on button, the lens comes out, accompanied by a high pitched buzzing noise. I can take the most basic of pictures, but zoom and macro are out of the question. "sniff"
Posted by Unknown at 7:33 AM 3 comments: 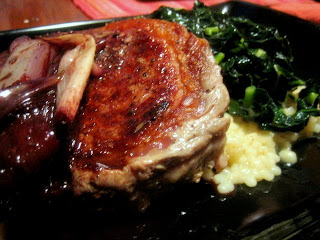 Dinner tonight was a steak with caramelised shallots and barley risotto with wilted greens, both from Fresh. I will post the recipes once I return from Sunny Edmonton, where I am going to hang out with my sisters. (It feels really strange to be able to say sisters plural)

My menu plan was tossed out the window last night; we were invited for dinner at a friend's place. I was commissioned to bring wine and dessert. Trevor prepared an AMAZING meal for us and we got to meet his SO Jin who was so nice.
First course from Trevor was sauteed prawns with Thai basil on a cold somen noodle salad. I could have licked the plate clean! 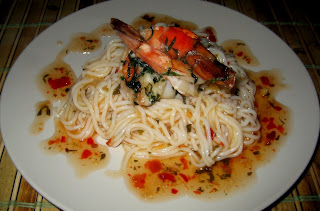 The main was a bison tenderloin steak on a potato gratin cake with asparagus. The jus served with the sauce was brightened with a hint of maple syrup. The bison was so good, tender perfect medium rare. think it tasted better than beef. And potato gratin, well, you just can't go wrong with that. 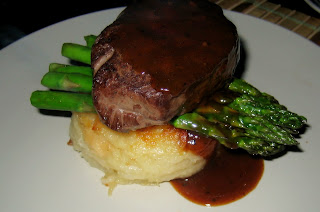 Dinner was a hard act to follow. I whipped up a tart earlier in the day at home. Decadent chocolate with sweet tart damson preserves. 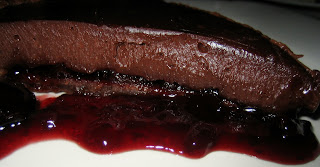 The wine for dinner was a township 7 Cabernet Sauvignon; it was a perfect match with the bison.

Melt the butter and chocolate together in a saucepan over low heat. Beat the yolks, eggs and sugar until they are light and fluffy. Pour the melted chocolate and Grand Marnier into the eggs and continue to beat for a minute.

Pour the chocolate filling into the tart case and return to the oven for 5 minutes. Allow to sit for at least two hours before serving. Warm damson jam and serve alongside tart.

Put all ingredients in a food processor and whiz to form a paste.If the pastry doesn't ball add a dash of cold water (i used an eighth of a cup.). Cover in plastic wrap and chill for half an hour.

Roll the pastry out as thin as possible and use it to line a ten inch tart shell. Chill until ready to use.

To bake, preheat the oven to 350F. Cover the pastry with parchment paper weighted down with pie weights or dried beans. Bake for 15 minutes.

Remove the paper and weights and bake for a further 5 minutes or until the base is dry.
recipe from Fresh, by Michele Cranston Pork Fried Rice
Originally uploaded by kayaksoup.
Remember yesterdays pork roast? It has been reincarnated as Pork Fried Rice, another budget friendly meal. I used leftover rice, leftover pork and whatever vegetables and herbs were in the crisper. Add eggs and tamari and voila. Easy AND cheap. I served baby bok choy along side which topped out at a whopping 18 cents per serving.
Posted by Unknown at 7:24 AM No comments: 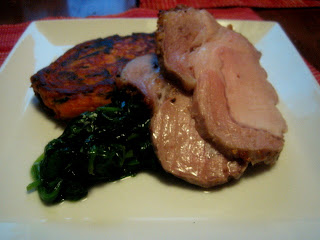 Preserved Lemon and Garlic Rubbed Roast Pork
1 1/2lb pork rib roast (I bought a larger one and cut it in half ~ budget cutbacks)
1/2 preserved lemon, flesh removed and peel minced fine
4 cloves garlic, chopped fine
2 tbsp coriander seeds, crushed
1 tbsp smoked fleur de sel(this is optional, I just happened to pick some up on sale recently. Any salt will do)

I have been feeling a budget crunch lately, so this meal was inspired by my need to buy inexpensive meat AND use leftovers (the yam cakes were made with leftover mashed yams). And from the roast, I have leftover meat which will go into tonights dinner.
Posted by Unknown at 6:25 AM 1 comment:

I am a pretty lucky gal... on those days when I am too tired to cook, Rob picks up the torch and prepares an amazing meal for me. Tonight, I was exhausted. I worked a double yesterday, the second half of the day being an amazing VIP catered event. I was home around 12, got up at 5:30 this morning and left for work. I fell aleep on the couch this evening as Rob prepared roasted vegetables, sauteed spinach and trout. 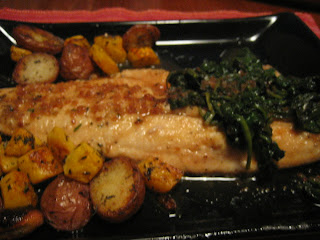 Two days ago, he whipped up steaks with spinach salad and mashed potatoes. Tomorrow...who knows?? 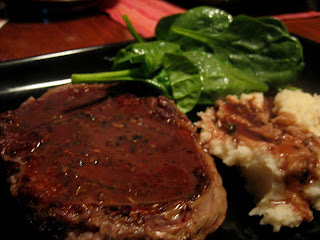