Remember me?? Yes, I know it has been a month since I updated. Life can get very busy here...

Where were we..... Ahh yes, day 6, New York City. I had spent the night in CT with Kathryn and her family. We got up early Sunday morning and took the scenic route to the train station (beautiful countryside). A few short hours and we were back in the city, heading for brunch at Sarabeths in Central park. Kathryn and I were joined by Greta and Stephanie and were seated promptly (thanks to Greta getting in line for us!). The portions were huge ~ I ordered an omelet with potatoes and bacon (or was it ham). 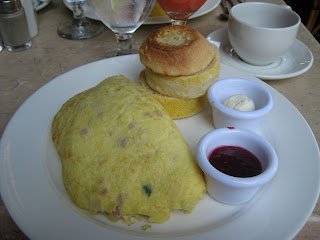 After a wonderful breakfast, chatting, watching the crowds go by, etc, we wandered through Central Park for several hours. It was a beautiful day and much more crowded than the last time I was there. The time flew by and before we knew it, Stephanie and Greta had to return to their families. (It was so nice to finally meet you both!). Kathryn and I made a token effort to do some shopping, but we were both suffering from some feet fatigue, so headed back to my hotel so I could check in. Imagine our surprise when we tried to cross Broadway only to discover a huge parade blocking the way. Apparently, it was a Dominican Days parade (loud and colourful). After managing to fight our way across, I checked into the Hilton in Midtown. My room was on the 20th floor and not bad considering the price. But the longer we were in the room, the more I noticed things. Like the black tape holding the shower head on OR the empty coffee station. Beggars can't be chosers though, so I was resigned to my fate. As we set out again for Penzeys and an early dinner, I noticed it was raining. Thinking that there might be a complimentary umbrella in the closet (there was at my last Hilton) I opened the door and looked around. No umbrella, but some stripey fabric on the top shelf.... I pulled it down to discover a pair of mens boxer shorts. On the way out, I stopped at the front desk;
"I was wondering if I could get the coffee station in my room refilled. And umm also could someone come pick up the mens underwear from the floor of my closet."
The desk clerk was mortified;
"Ewwww. Would you like us to move you to another room?"
"No, I don't want to be too much of a bother. If someone comes and gets it, that would be good."
"no, I insist, we will move you."
And just like that, I was on the 30th floor with a swanky suite that was obviously much newer and much nicer. I love the Hilton.
After a brief moving around of luggage, Kathryn and I set off again. On the way to the Grand Central Penzeys, we discovered this adorable Japanese pastry shop where I picked up a few snacks for later. 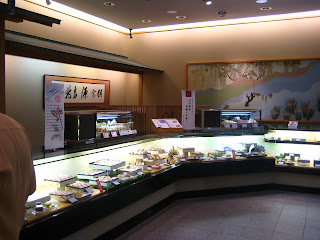 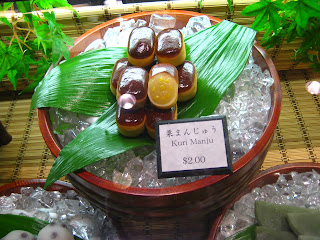 We ended up having dinner at a little Thai place near Grand Central, then I said goodbye to Kathryn as she headed home to CT and I went for a wander up Madison Avenue, looking in all the pretty stores along the way.

LAter that night, I left my hotel after dark and made the trek to Times Square. It was probably 10 or 10:30 and the streets were packed. The sky was lit up by all the signs and I could only take a few minutes of it before I had to duck away down another street. I ended up finding a little Japanese place and enjoying a late night glass of wine with a gorgeous looking (and tasting) hotpot. 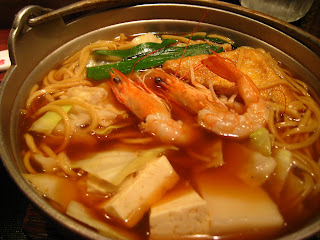