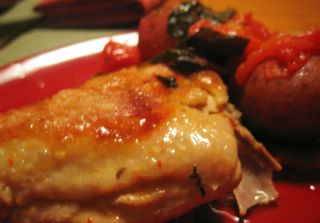 Friday night dinners, I have a little freedom and like to make something that takes a loong time to cook. This particular dish I have made before and will most likely make again. The recipe came to my attention via the CLBB, I believe originally posted by Sweetnicks and I have done very little to modify it.

Preheat oven to 275. Season the chicken pieces with sea salt and freshly ground pepper and put them in a snug-fitting pan in one layer. Throw in all the basil leaves, the halved cherry tomatoes and the potatoes.(did not add potatoes at this point) Scatter the garlic cloves into the pan and drizzle over some olive oil. Mix around, pushing the tomatoes and potatoes underneath the chicken. Place in the oven and bake for 1 hour. Take it out, and stir it all around a bit and raise the heat to 325 and cook for another 2 hours(, adding red potatoes when one hour left). It's done when you see clear juice coming from the chicken when pierced and the meat falls off the bone.

I saved the juice, defatted it and used it in another recipe, which I will share later...
Posted by Unknown at 7:11 PM

Glad you liked the recipe - one of our favorites, particularly since it's so darn easy to make! :) Just an fyi - there's a typo in the link for my site.

Thansk for the heads up... I fixed the problem ;D

Mmm. That looks great, and easy, and the leftover broth is a bonus! I'm going to go print this one out...