Once again, jumping on the bandwagon, I decided to play along with IMBB this month, hosted by A La Cuisine. The theme is tea.
I drink tea not infrequently, Rooibos being one of my favourites and I purchase it from a local tea company. I don't know a whole lot about tea though, so I decided to throw caution to the winds and try something new ~ Lapsang Souchong. For those who have never experienced it, it is a powerful, smoky, black tea which just screams out for a culinary use. 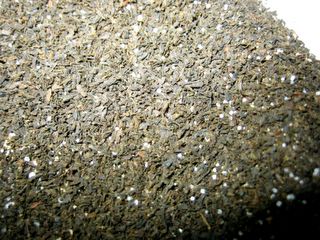 I bounced a few ideas off coworkers and classmates and Rachel suggested I try pairing it with lamb. I don't know if there are pre~existing recipes out there, I just went for it and came up with my own. I ground the lapsang in my mortar and passed it through a sieve. I mixed salt and pepper into the now~powdered tea and pressed lamb loin chops into the mixture, making sure to coat both sides of the chop. I set that aside and combined red wine, gooseberry jam and a teaspoon of tea in a saucepan and brought it to a boil, turning it off and allowing it to steep after it had simmered for a minute. I strained this mixture, popped it in the refrigerator and headed off to get my hair chopped off. When I came back, I heated the oven to 400F and my grill pan to smoking. I placed the chops in the pan, just long enough to mark, about 1 and 1/2 minutes between quarter turns and flips. After the last quarter turn, it went into the oven for 8 minutes ( I like my lamb medium rare). I served them with the sauce, Swiss chard and beautiful pemberton potatoes. 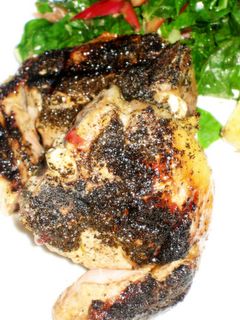 Hi Linda, that looks delicious. I really enjoy lamb too, and I can imagine that Lapsang Souchang's smoky aroma would work well with it. Thanks so much for taking part in this month's IMBB!

Thank you! Looking forward to reading about all the other entries...