This week, we move on to the southern US. Second week with Chef Christopher and I actually like him, I think. He doesn't treat us like children who need to be coddled, he makes us fend for ourselves. Which seems to irritate some people in my class ~ one in particular whined and rolled his eyes so much today, I was ready to strangle him. Stop whining!! Get on with it!! Who said life was supposed to be easy?? Anyway, enough of that, on to the food. First course : Hoppin John Salad 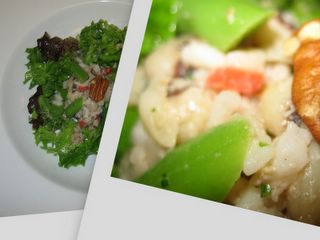 One of my classmates decided that we are making pornographic food this week between the Hoppin John Salad and the Carolina Pulled Pork! I quite enjoyed the flavour of this salad, although I found it to be a little ugly to plate. At least we got to use baby lettuce instead of big butter lettuce leaves.
This was followed by Grilled Quail with Fried Green Tomatoes and Roasted Tomato Sauce and a "Grits" souffle (really made from cornmeal). The Quail was very easy to throw together as were the tomatoes. The challenge was the souffle and the time we were given to cook them was incorrect ~ they were slightly undercooked, but still delicious. I will try them again at home. 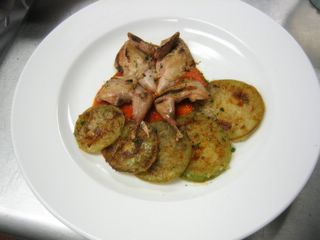 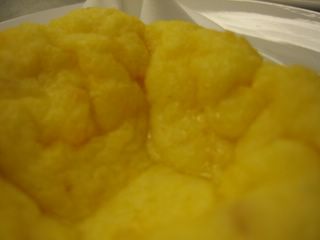